I love working for Gigaom because we don’t settle. Ever. The Gigaom Key Criteria and Radar reports have gotten a lot of attention lately, because they focus on technology, execution, and roadmaps, instead of vendor revenue and market share. It’s an approach that is really appreciated by decision makers and our subscribers.

GigaOm subscribers know that we produce a lot of different types of reports. These include use case analysis reports, benchmarks, TCO reports, and more, but I thought we needed something unique to help give our subscribers an additional edge over their competition. In the end you work with an analyst firm just for one reason: to get better information, quicker, so you can improve and speed up your decision-making. This means it’s our job to anticipate and predict what’s coming next, to help you get ahead of the market.

As our library of Key Criteria and Radar reports has grown over the past two years, we’ve found out that there are emerging technologies that are not ready to be strictly categorized and assessed based on a common framework of evaluation metrics and features. These market sectors are usually populated by a few nascent startups. Often, the core technology across products is similar, but the implementation and initial use cases vary so widely that one-to-one comparisons would be unfair and produce little insight for our clients.

Our Sonar reports are aimed at emerging technologies that are potentially disruptive but not yet ready for mass-market adoption; nor are they yet validated by enterprise standards. These technologies may not be ready for center stage and available products may elude authoritative assessment, but that doesn’t make them less important. Quite the opposite, these bleeding-edge solutions offer the opportunity to create strategic advantage for enterprises that act on them. The question then becomes, how can we bridge the gap between the need to exploit the latest technology and the risk associated with it?

You can think of the GigaOm Sonar as a prequel to the GigaOm Radar. Sonar reports evaluate technology that is new, interesting, and attractive but poses intrinsic risk when it comes to enterprise adoption. Maybe it’s too early to adopt now, while presenting an opportunity you don’t dare miss. Having the right information at the right time can change how you plan your strategy:

If you answered “no” to these questions, then the GigaOm Sonar report can help you evaluate new technologies that are not yet mainstream but could yield dramatic advantage if implemented and deployed in the right way. Even for the risk averse, the Sonar offers valuable insight and context, enabling decision makers to consider options and shape their plans for the future. 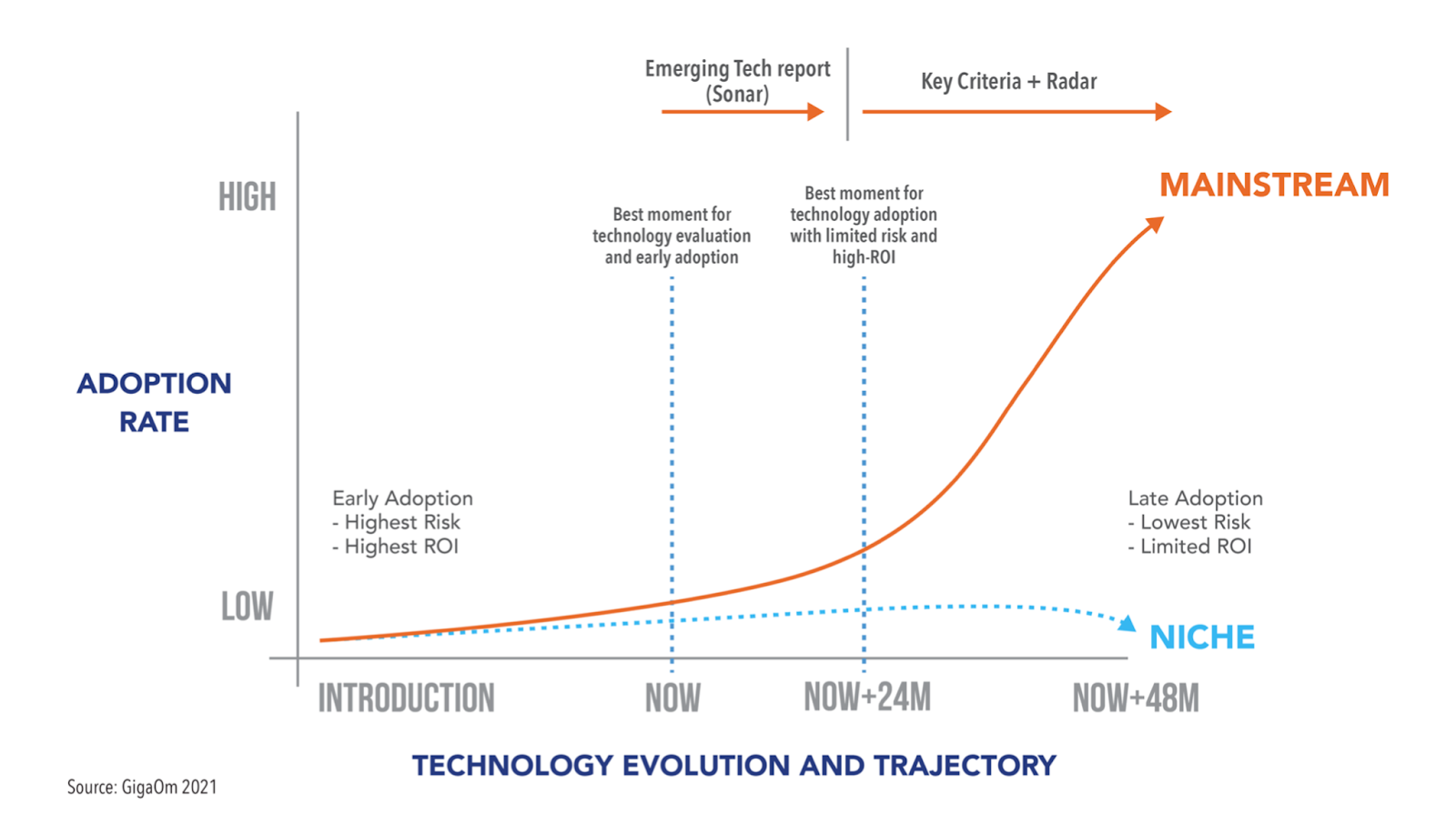 A radar is a sophisticated and powerful system to determine position, direction, and velocity of objects. We adopted this concept to give our clients a clear view of the market landscape with a detailed view of vendor positioning, direction (based on technology roadmap), and speed (based on execution). As I wrote earlier, doing this for an emerging technology is almost impossible. There are several reasons for that, but the most important is that we are navigating uncharted seas. The sonar is an irreplaceable tool when it comes to evaluating depth under your hull when sailing, especially if you don’t have a GPS or up-to-date navigational charts.

It’s worth noting that the Gigaom Sonar can’t be as accurate in providing technology assessments as the GigaOm Radar, and that it serves a different purpose. Still, it provides vital information and context to make better-informed decisions as you navigate through the competitive environment.

For example, the Radar classifies vendors into two broad categories—mature providers that tend to be more careful and conservative, and innovative vendors that tend to be more aggressive and risk-taking. However, this distinction doesn’t hold in an emergent product category where everybody is driving hard to innovate in its own way. The same goes for the other Radar report category breakout, where platform play vendors are more focused on integration and breadth of solution and feature players are more focused on addressing specific use cases with sharply focused features.

The emergent nature of sectors in a Sonar report, however, means that all vendors are niche players, and that the distinctions drawn in the Radar report don’t translate well to the Sonar. As a result, we chose a triangle with axes for Technology, Strategy, and Roadmap to depict vendor positions. If you were to take the vendors ion a Sonar report and drop them into a Radar report analysis, they would all end up in the Radar’s bottom-right (Innovators and Feature Play) quadrant.

The three-axis Sonar chart is simpler than the Radar, with each axis defined as follows:

This three-point analysis offers a clear view of where each vendor is today, where it is going in the upcoming months, and how maturely its product or service is implemented. For example, a vendor that is close to the technology axis has a good core technology and the direction will tell you if it is focused more on developing the product even more (arrow pointed to Roadmap) or is starting to build the necessary go-to market strategy and ecosystem to expand use cases and adoption (arrow pointed to Strategy). The distance from center gives an idea of the maturity of the solution. Contrary to the Radar, the Sonar doesn’t account for pace of progress or development (the Outperformer, Fast Mover, and Forward Mover designations familiar to the Radar reports). Most of these vendors are startups, all very nimble but still at a very early stage, which makes this kind of evaluation difficult.

The first Sonar is already available online to our clients. Here is the link. The plan over the coming months is to publish multiple Sonar reports covering a range of emerging technologies and trends, with the goal of providing our subscribers with a powerful competitive advantage.

Qualcomm announces Snapdragon 888 Plus at MWC

Samsung says an S Pen for foldables is coming at Unpacked